Vertical Grand Serre (VGS) is among the world’s shortest vertical kilometres (VKs), enclosing an elevation gain of 1000 metres in just 1811 metres. In 2019 this was also the finale of the VK World Circuit. It is simply another real dream challenge for the vertically inclined!

This was the third of my 3 planned events for my time in Europe this year, following the K3 in Italy and the Cvrsnica Ultra Trail in Bosnia and Herzegovina. Some disturbance with my left forefoot in the preceding two weeks, and a lack of structured training, meant that I wasn’t in the shape I had dreamed of. I had pondered that I could get close to a 40 min finish with some serious training. Maybe another time. As it was, I really wanted to go under 50 min, and a great day might see me close to 45 min.

Staying in Grenoble, a 40 minute drive north of the town of Cholonge, which hosted the VGS, I had organised a ride with two friendly Frenchmen. Serge and Baptiste were great company for the day!

Arriving to Cholonge it was much chillier than Grenoble as we were still hidden from the rising sun. After collecting the race packs, which included a box of special tea and a large custom event beer (the perfect gift for the carpool driver from a teetotaler), it was soon time to deposit my bag of clothes to be received at the summit, but it was still damn cold! Fortunately, as I emerged from the WC, the sun had just climbed the hill I would soon conquer, and shone down friendly rays of warmth and good will. Time to get to the start line! 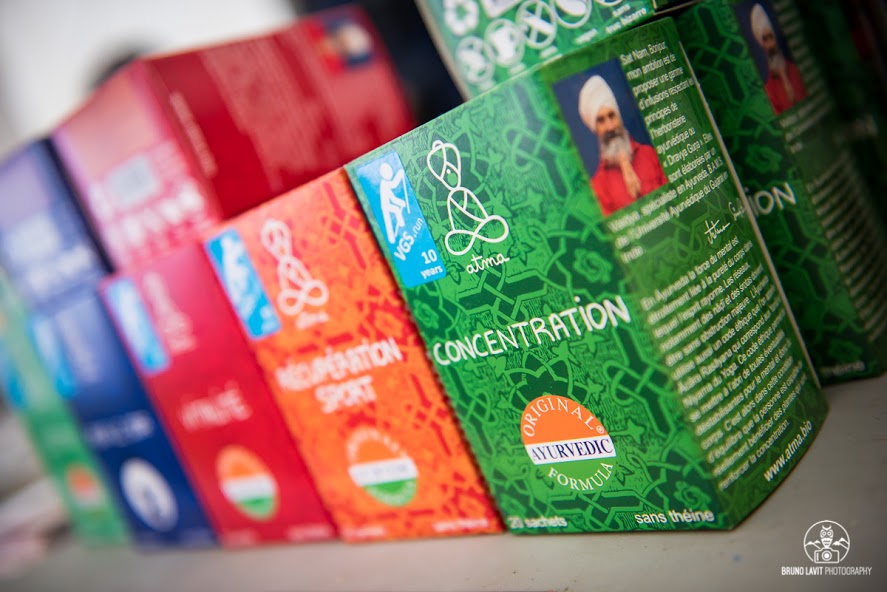 I went for the ‘Revive’ tea.

My lack of experience had me starting at seed 295 of 310 in the time trial type staggered start. We were unleashed in 20 second intervals. The clock ticked up to 10:05:40 and I was off! It’s hard work all the way, so the initial onset of discomfort is not to be taken as a bad sign. I soon found myself scrambling past a couple of other competitors as I hit the first 100 vert pretty solidly. Overtaking when you are only just going a little bit faster than the person in front, and need to swing out off the main well worn route to do so, takes a serious push. 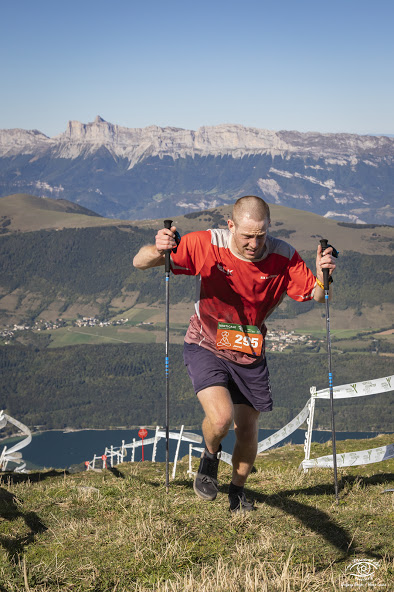 By the 300 vert mark I was still clinging on to 45 min pace. A good start, now for the challenge of hanging on. After a very brief stop at the water station near 400 metres, I settled back in and was soon closing in on half way! 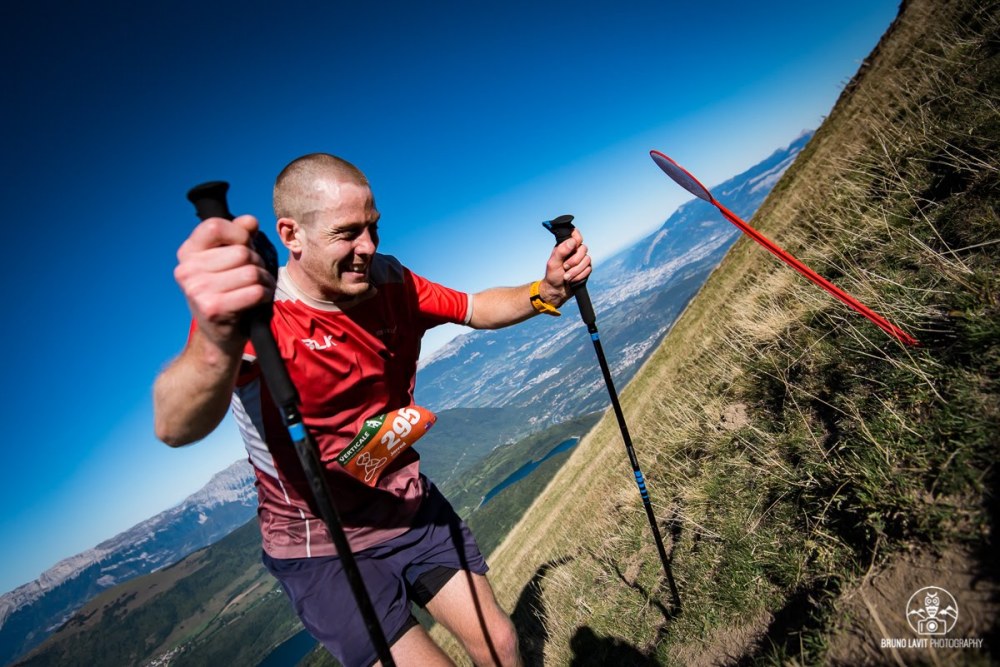 There’s some good views in France!

More passing ensued as I struggled through the guts of the climb. Unfortunately, the 45 min pace was slowly fading away. As the summit neared, I decided to try to push it even more for the last 200 vert – initiate Goggins Mode! The challenge of keeping the feet moving steadily at all times really took focus. Soon the last 100 metres was in sight – leave it all out there! I poured it on and snuck in some extra pace for the very last metres to the line. 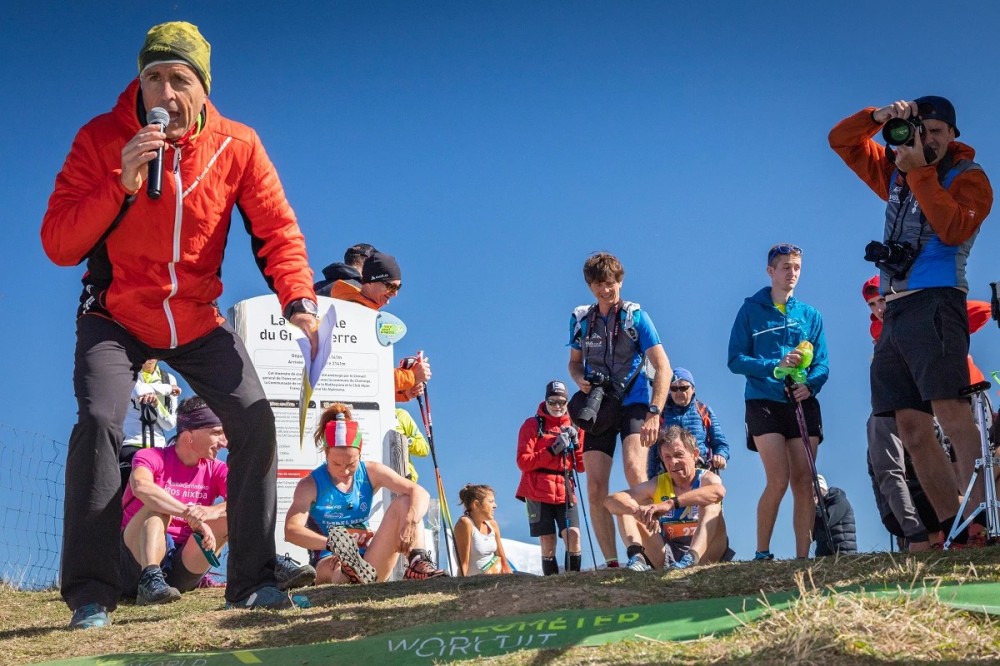 The atmosphere of the event was fantastic, with people cheering right next to you, particularly in the finishing chute, and an enthusiastic MC at the finish line with cries of “Alle, Alle! Superb!” I crossed the line and took some moments to catch my breath before enjoying the refreshments available up on the summit of Grand Serre!

It was a stunning view of the surrounding mountains, back towards the city of Grenoble, and of the lakes below. A bit of MJ and other classics were pumping on the sound system, adding to the fun. Checking my time on the screen, I had got it done in 47:12. I wish I had my phone there to snap a photo while I was still on the leader-board before the real athletes started to steamroll over the line haha.

It was a real delight to watch finely tuned men and women power up the final section of the course. I clapped as a man with one leg pushed up through the finishing chute and over the line. Talk about inspiring! I think I’ll save my excuses now. There were strong cheers also when Axelle Mollaret stormed past, and the finish line erupted with cheers when a new woman’s world record was confirmed! There was some nice pocket money for Axelle for doing so at VGS this year. 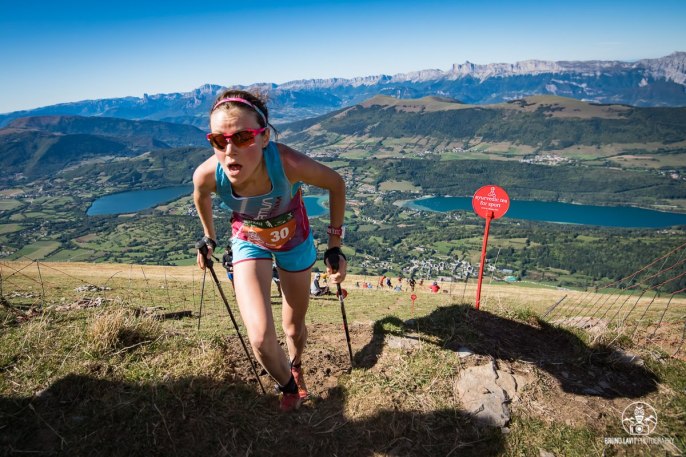 The fun in the sun continued down in the village after a less than pleasant descent on some rather steep terrain… The post race food was nice and included a chunk of cheese for each competitor, that I could only imagine finding in France! After a feed the driver was keen to return to Grenoble, so I never did see if there was a prize for the competitor with the most distant passport… 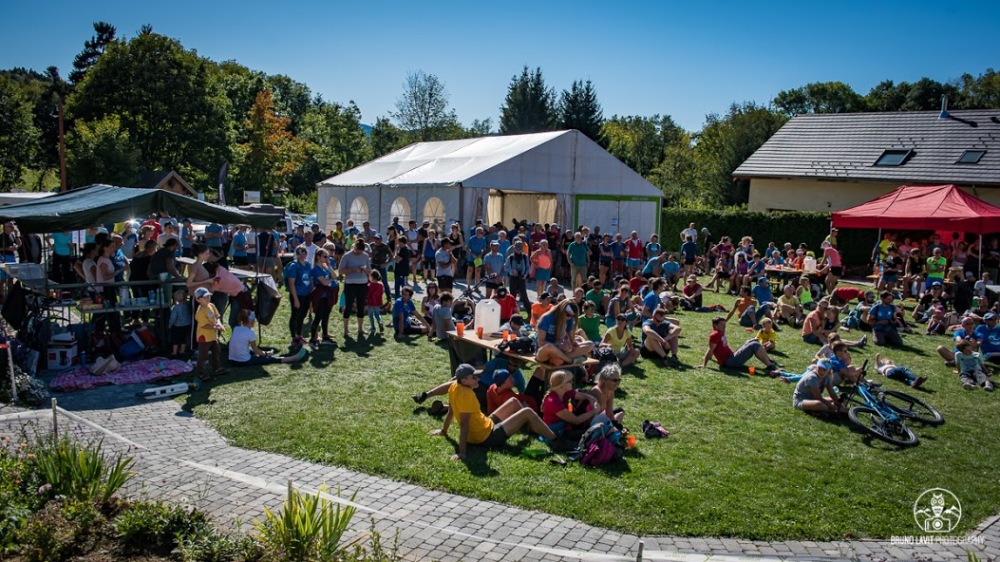 Relaxing after the VK.

Vertical Grand Serre was a great experience! Going forward I am keen to work on some speed and shorter climbs. Thanks to Bruno Lavit, ‘au Regard des Envies’ and others for the great photos!

Double shaka at the VGS!