The Old Ghost Ultra (or ‘Ghost to Ghost’ as my mum coined it) wasn’t on my hit-list this year. However, you only ever hear great things about the event, and the rare chance for a late entry was tempting. After a fun evening at the ‘Run with Ruth’ on Tuesday, it was all go, go taper that is. 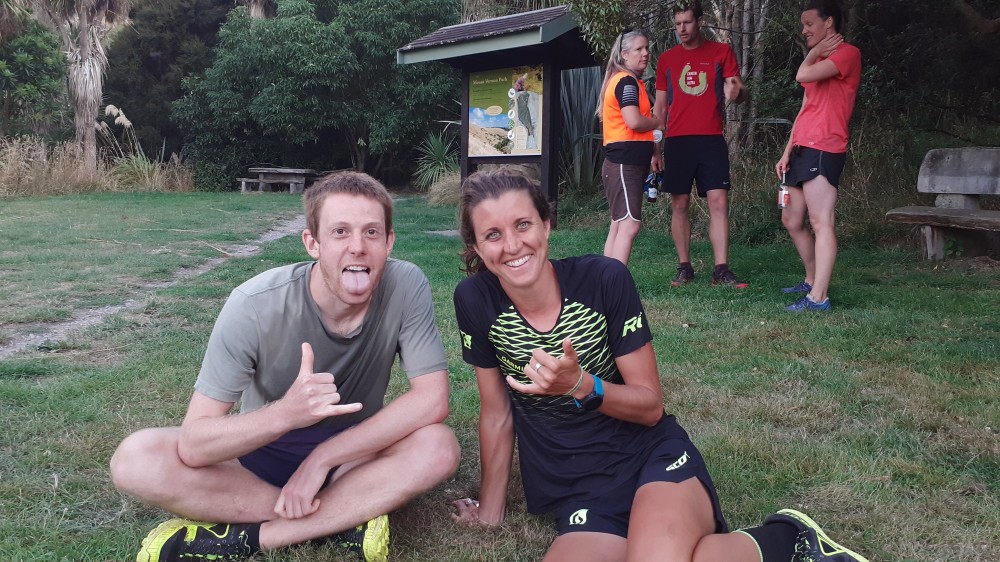 Pretty stoked with my new friend!

It was all jokes and excitement arriving to Westport with a great team for the weekend. What a delight it was hanging out with Andy, Lee, Yonni Kepes – Trail Runner, Viv, and the Old Ghost himself, Ben Kepes. When Ben Kepes isn’t at work, his alter-ego ‘Ken Bepes’ comes out, and Ken is quite the character! It was the gift that Kepes on giving.

Just as well there was a healthy dose of humour about. A big day lay ahead. Unique to the OGU is the fact that the second aid station greets you at the end of the first of two marathons for the day! 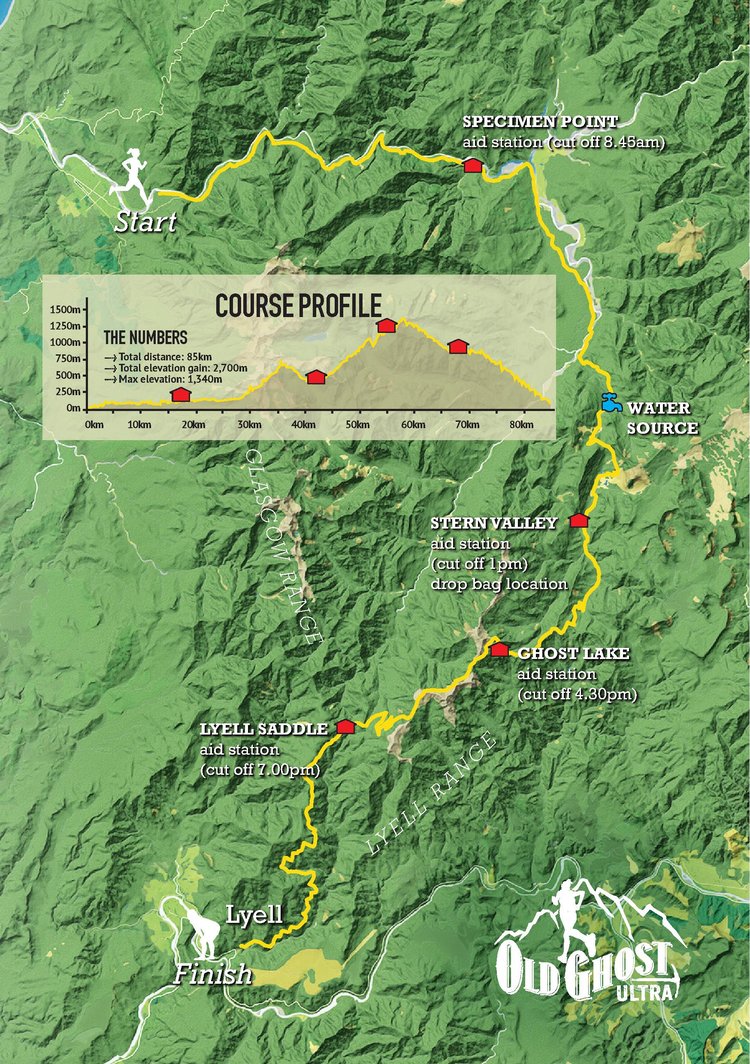 At registration the volunteers confirmed it was too late for a refund, and I collected my goody bag. My first exposure to the brilliance of race director Phil Rossiter during the briefing was a real treat. You won’t find any spoilers here – just go and see the movie next year please. Suffice to say the man knows how to make an engaging presentation! 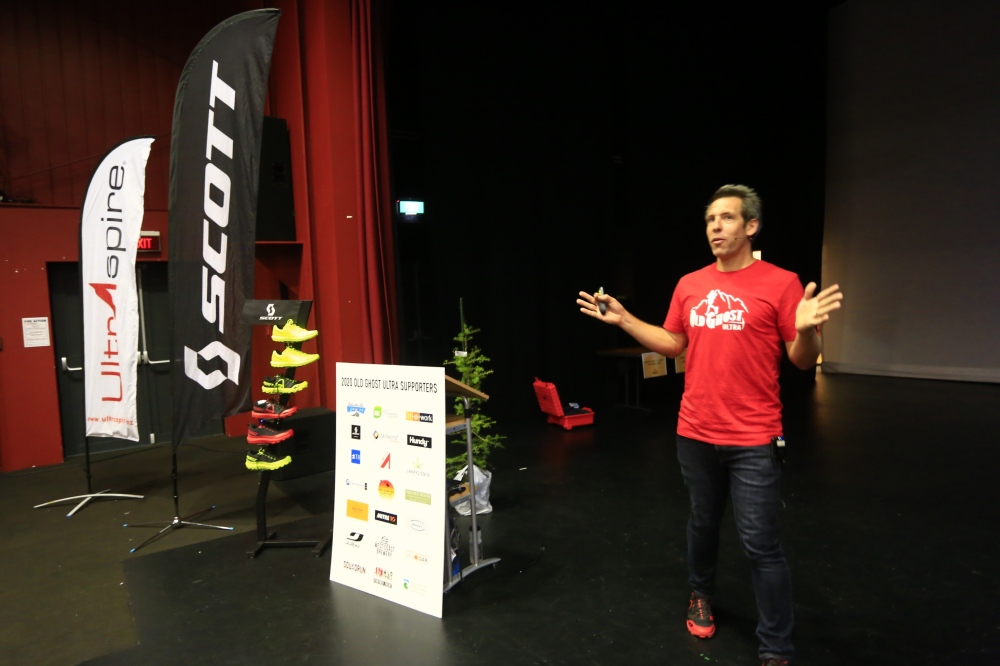 Following more banter and an anxious, unfulfilling sleep, it was 3AM! The lads were up eating, joking and lubing up for the day’s mission. After a short drive to the NBS Theatre, we loading onto the buses, quite like cattle on the way to some odd sacrifice ritual. Maybe Andy wasn’t joking yesterday!?… Lining up for the start, there was just enough time for some friendly Hagley Hombre chat and a heckle from Grant Guise before we were off! 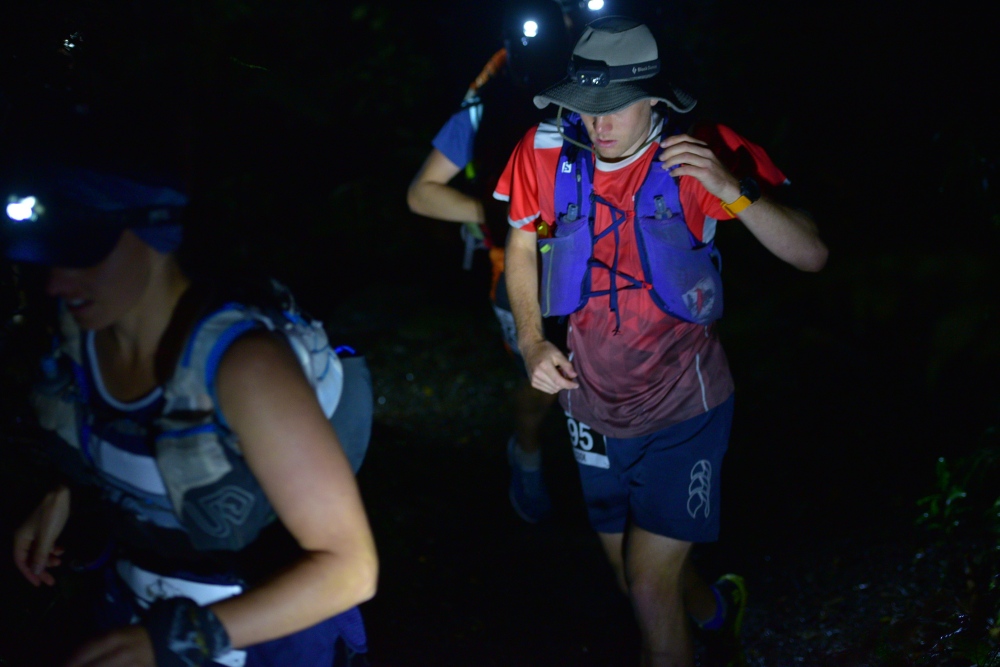 Getting by with the light from other competitor’s headlamps.

It was exciting to get underway, but it would be a long day ahead so taking it easy with the pace was key. The group slowly started to stretch out a bit, allowing some breathing space and settling into a rhythm. One fellow Ghost pushed me impatiently while waiting at a bridge crossing and I let them know in no uncertain terms that that wouldn’t fly. Hopefully that didn’t ruin your day.

I eventually landed with Jim McIlraith and Grant Guise. These two would be great company for the next few hours. I was impressed with Jim’s reverse handshake introduction while running along without missing a beat. I knew I needed to arrive to Stern Valley and Ghost Lake feeling alright to avoid a bad day. The pace here felt like it was near the upper bound of what would make that possible. 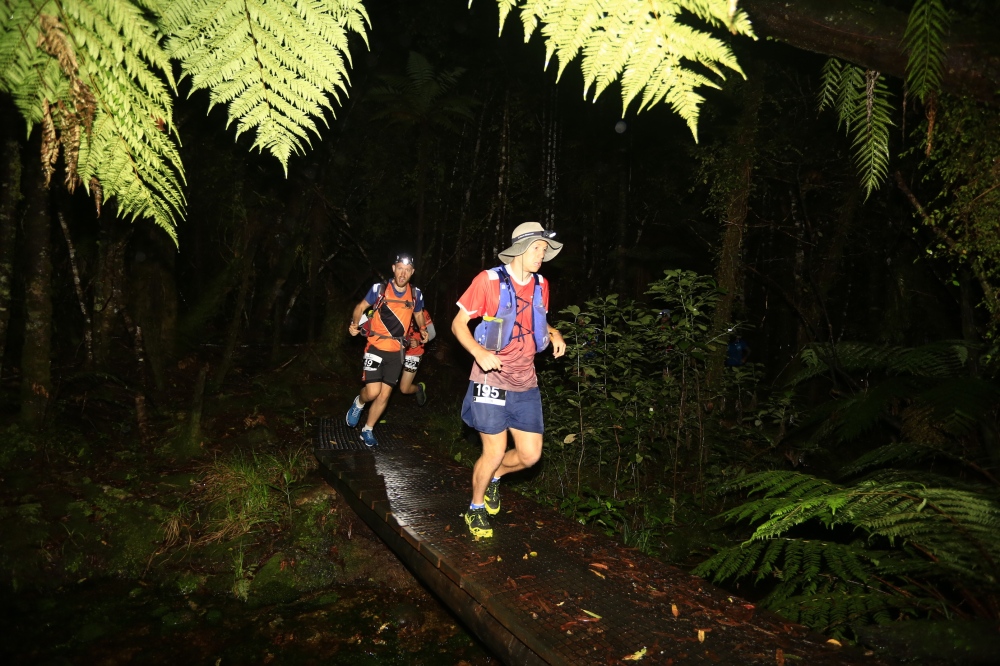 Getting after it pre-dawn.

Skipping to around 16:00 on the Specimen Point facebook live video you can witness the Jim Train arriving with G-man and myself on board. My split here was 1:44:48, putting me at +16:45 compared to Ruth Croft. 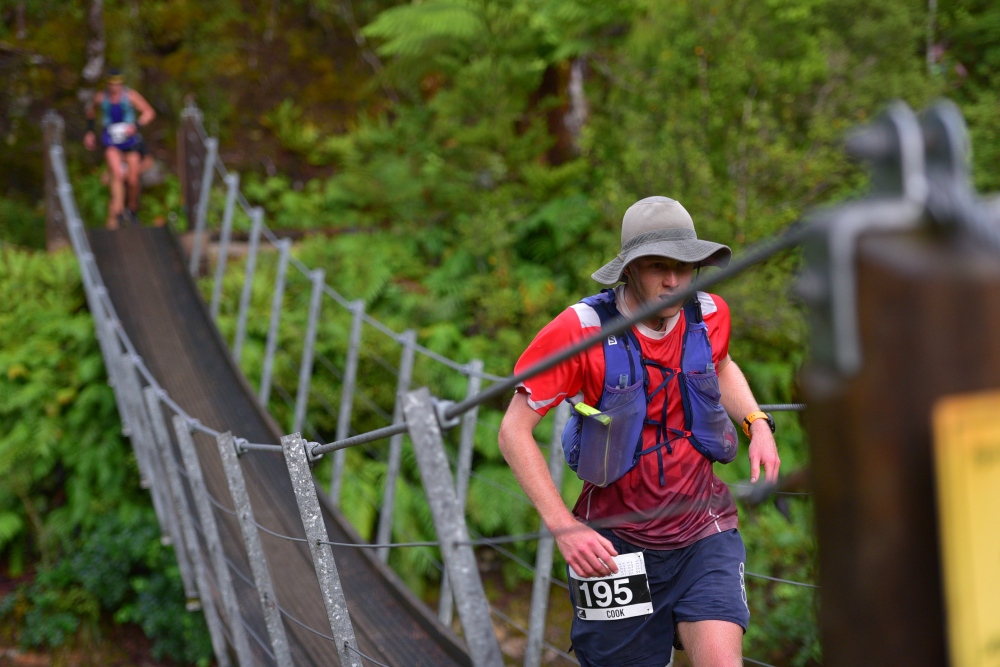 Dealing with that awkward bridge bounce while knowing you’re being photographed.

It’s a long way between Specimen Point and Stern Valley – 25km. This is where my concern for my own stomach started. At this stage, it was settled enough to keep moving pretty well. Rolling along with Grant and Jim made the miles tick by a bit faster. However, we eventually drifted apart, settling into our own lonely suffering. 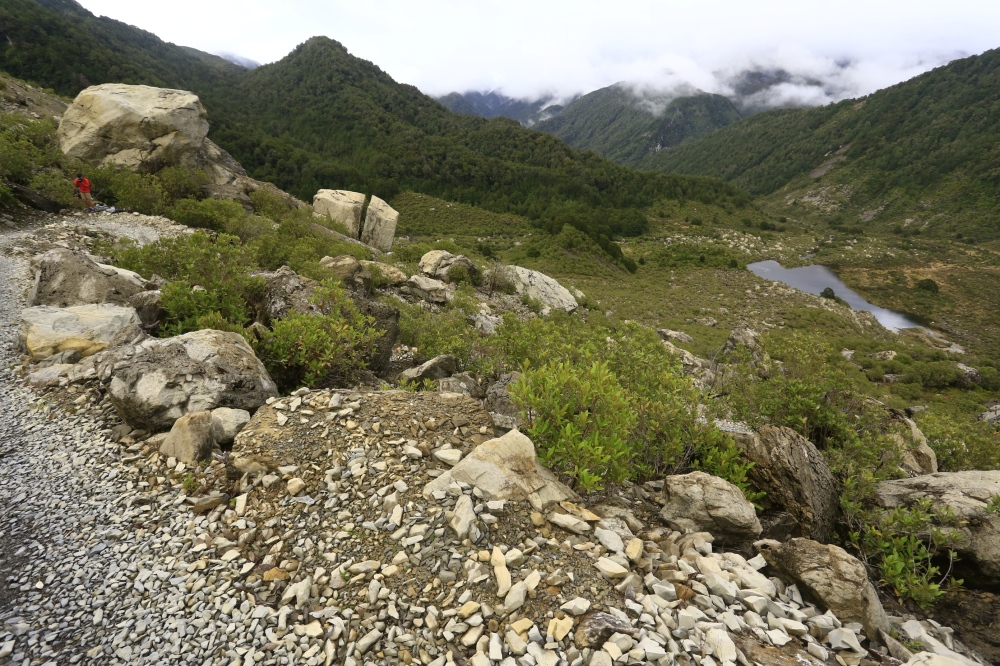 Beautiful New Zealand backcountry! Get amongst it!

Arriving to the Hanging Judge was a boost as I knew this marked a decent climb prior to the descent down to Stern Valley via the Boneyard. Ticking off the landmarks you remember from the course profile and the pre-race briefing is a good mental tool to break up the day and recognise progress. Jim caught back up and was a good support through this section as I started to see it wasn’t going to be my day out there. The fancy baby food went down a treat at Stern Valley, thanks Jim! 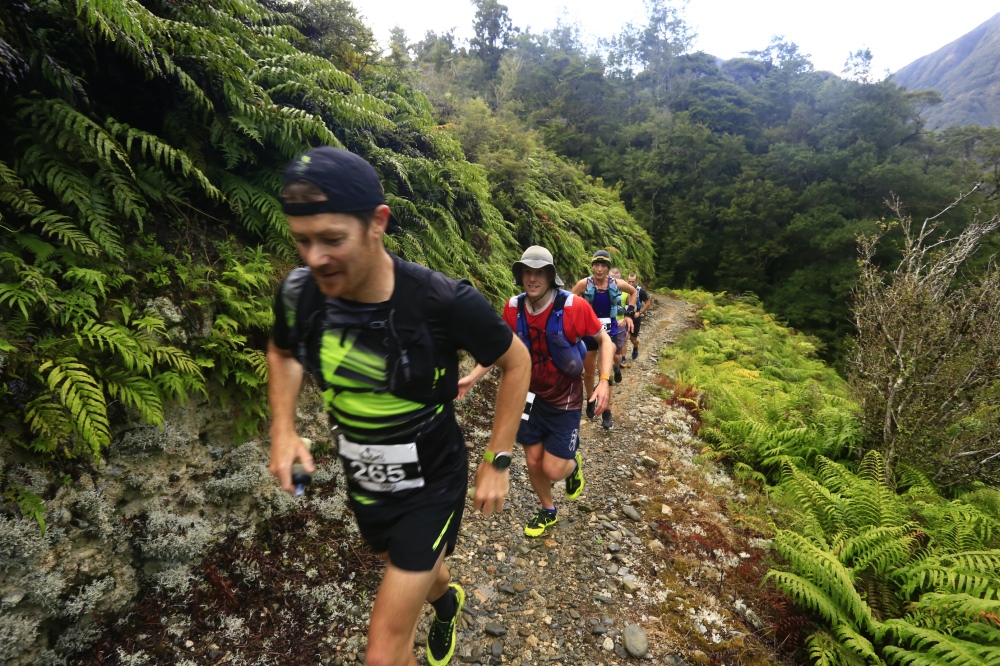 The man, the legend… with me in tow.

I was keen to get into the main climb of the day up to Ghost Lake Hut, so I could feel much better about the increasing amount of walking going on. The climb was a real slog. It’s mostly quite a nice grade, which would be great to run if part of a shorter outing, but I definitely didn’t have the legs for it today. It was good practice for switching often between running and power-hiking.

You see the hut while you’re still quite a long way out, and the positioning makes you wonder ‘oh, how are we getting up there?’ Arriving to the skyline steps was another way point checked off and the ~300 steps flew by in the context of the day. The exposed section above was great! Ridgelines are really one of the special aspects of trail running and the views of the hilly landscape and surrounding dense bush were a treat. 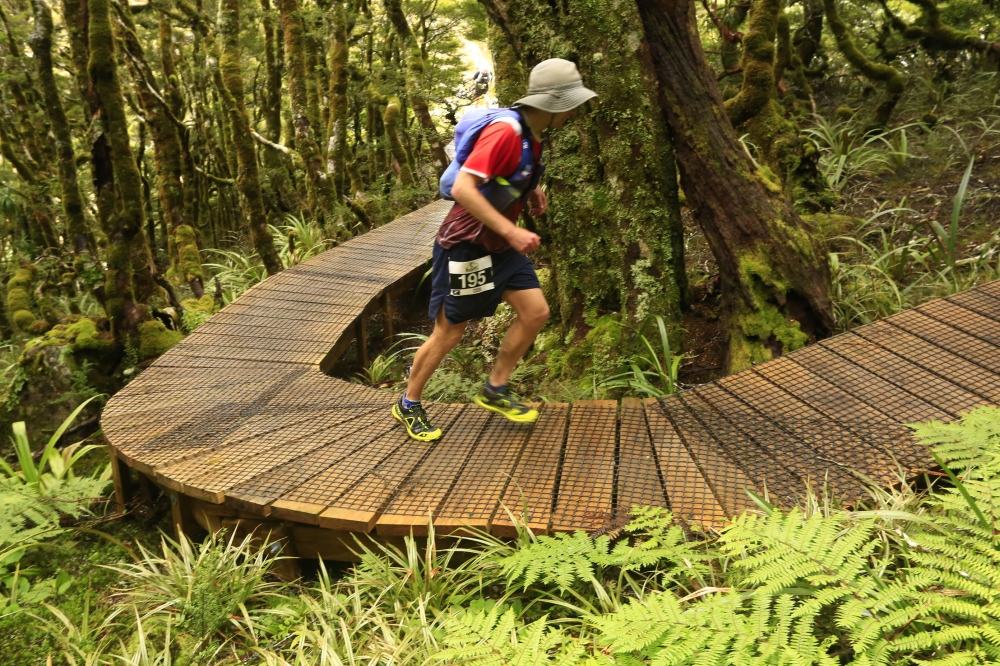 After an annoying dip back down some metres, it was on to the final push up to Ghost Lake! It’s a great track through here winding up towards the outcrop supporting the hut. There’s always time for one last trick, and the trail managed to overshoot the hut required heading back in the other direction as the trail continued.

A photographer ambush just below the hut drew a jog out of my tiring body, pushing me through the last metres to the aid station. Despite now having a handy lead over Vajin, I was knackered. 7:12:42 on the course so far, +2:04:38. Watchers at Lyell were getting excited now as Ruth was only 18:26 away! 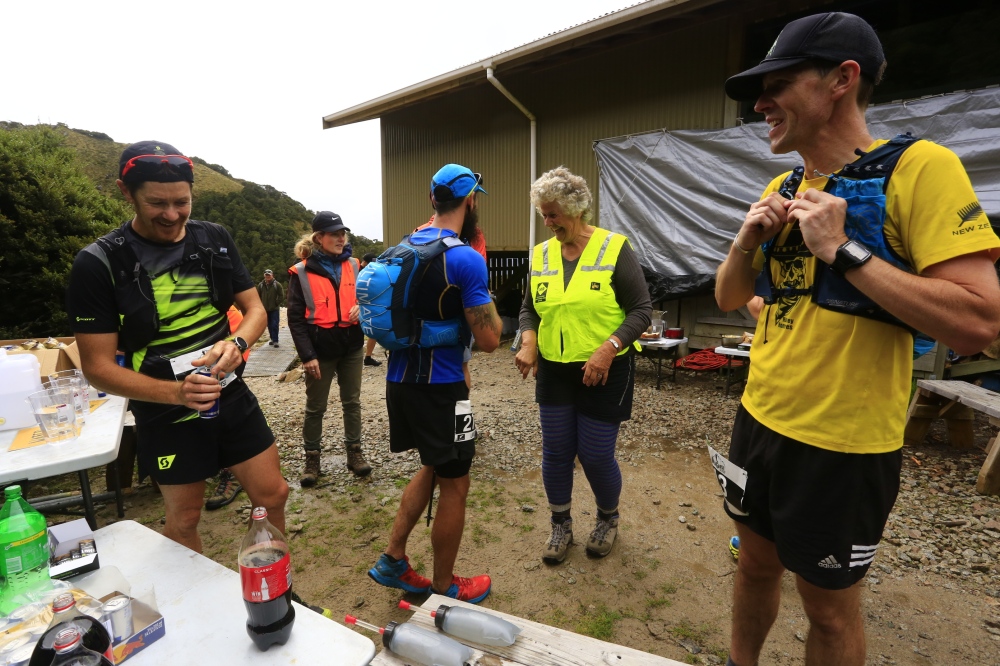 Grant Guise publicly bragging about how he had ‘broken’ me.

After another refill courtesy of the great volunteers out on the course, there were just a few more uphill kilometres to conquer before beginning the long descent to glory in Lyell. This section of the course was a real highlight! The weather on the day was not partial to full enjoyment of the view, but it was a fun section of trail and the odd glimpse through the clouds was a nice bonus. Heading along the top, visibility got a bit better and I trundled along, scaring Willy Weka off the track in the process. Close encounters with wildlife are always a pleasure. 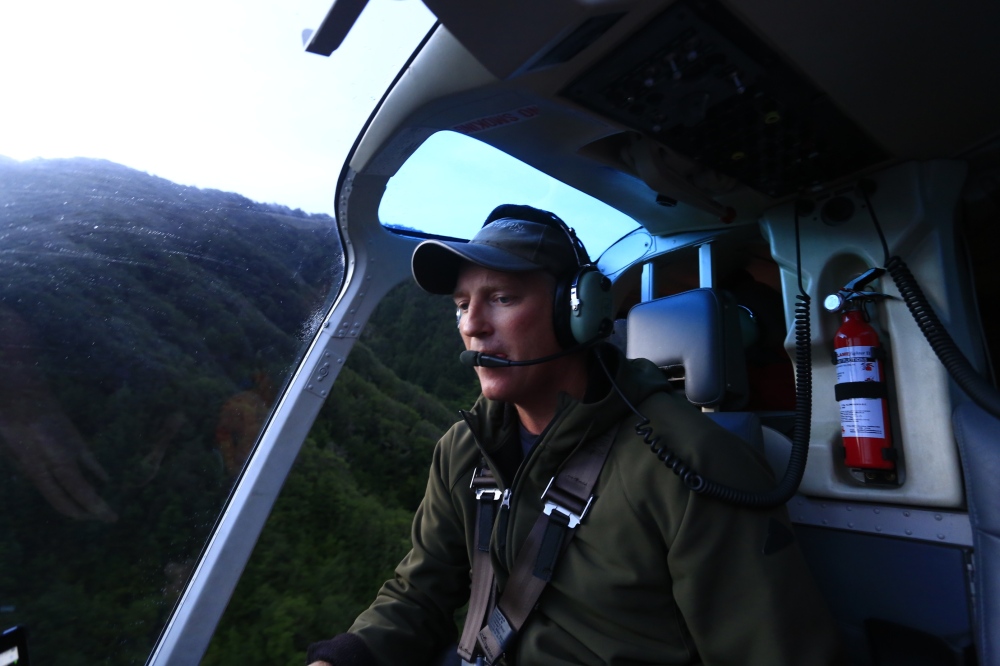 “Hold on team. I just need to accelerate a bit to make sure we actually arrive at Lyell before Ruth!!”

With the descent as well, the grade was rather amenable. If only my legs and stomach had been more receptive at the time! Mustn’t grumble. It was rather a special place to have a ‘bad day’. After some more beautiful forest trail, I made it to the final aid station at Lyell Saddle in 8:39:43, making it +2:30:29. Ruth had been chilling out at Lyell for over an hour now!

After a final swig of a popular energy drink, the remaining 18 kilometres of descent into Lyell beckoned. This was an interesting part of the day. Travelling mostly in enclosed bush, there wasn’t too much to get distracted by, and I revised my finishing expectations as I went. Eventually I was happy to avoid an extreme push here and also avoid any silly injuries near the finish line. I had been humbled by the race and went in with unrealistic expectations for my situation. It would be great to tick off a stunning event and start plotting a second attempt, with no particular year attached to that plan. Also a great reminder of how much I was looking forward to some shorter events coming up this year! But seriously, let’s drop the self-pity. 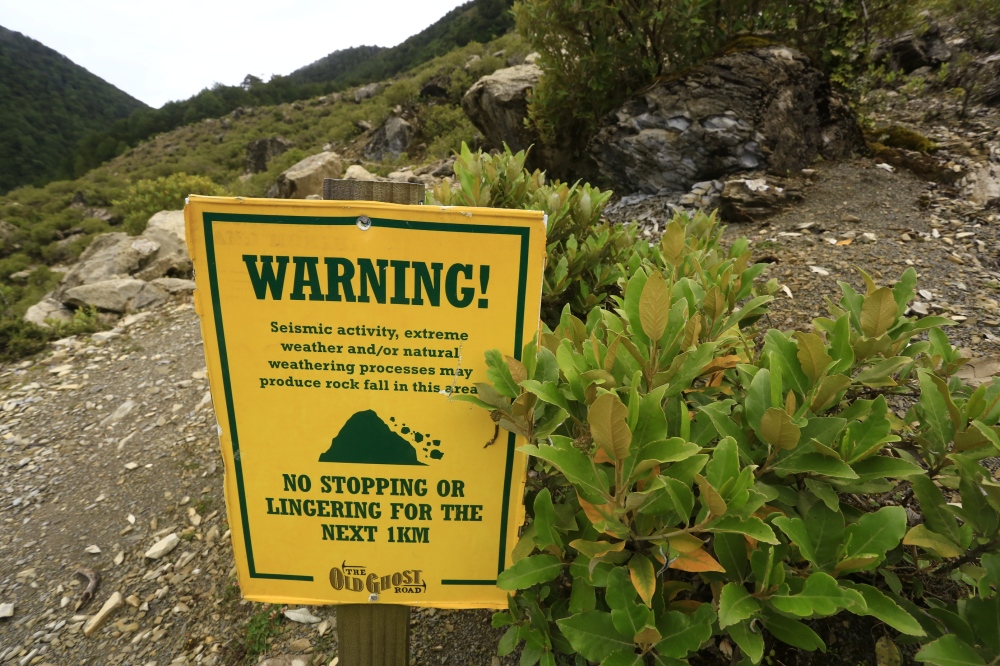 Warning: no feeling sorry for yourself allowed!

I really enjoyed the last couple of kilometres with supporters and other track users spread along the trail cheering me on! I bounded awkwardly across the final bridge, dealing as best I could with the bouncing, snagged a high five and fluttered over the finish line! I was home in 10:40:33 and promptly enjoyed a veggie burger and ginger beer. Ruth had received her veggie burger 3:09:25 earlier! 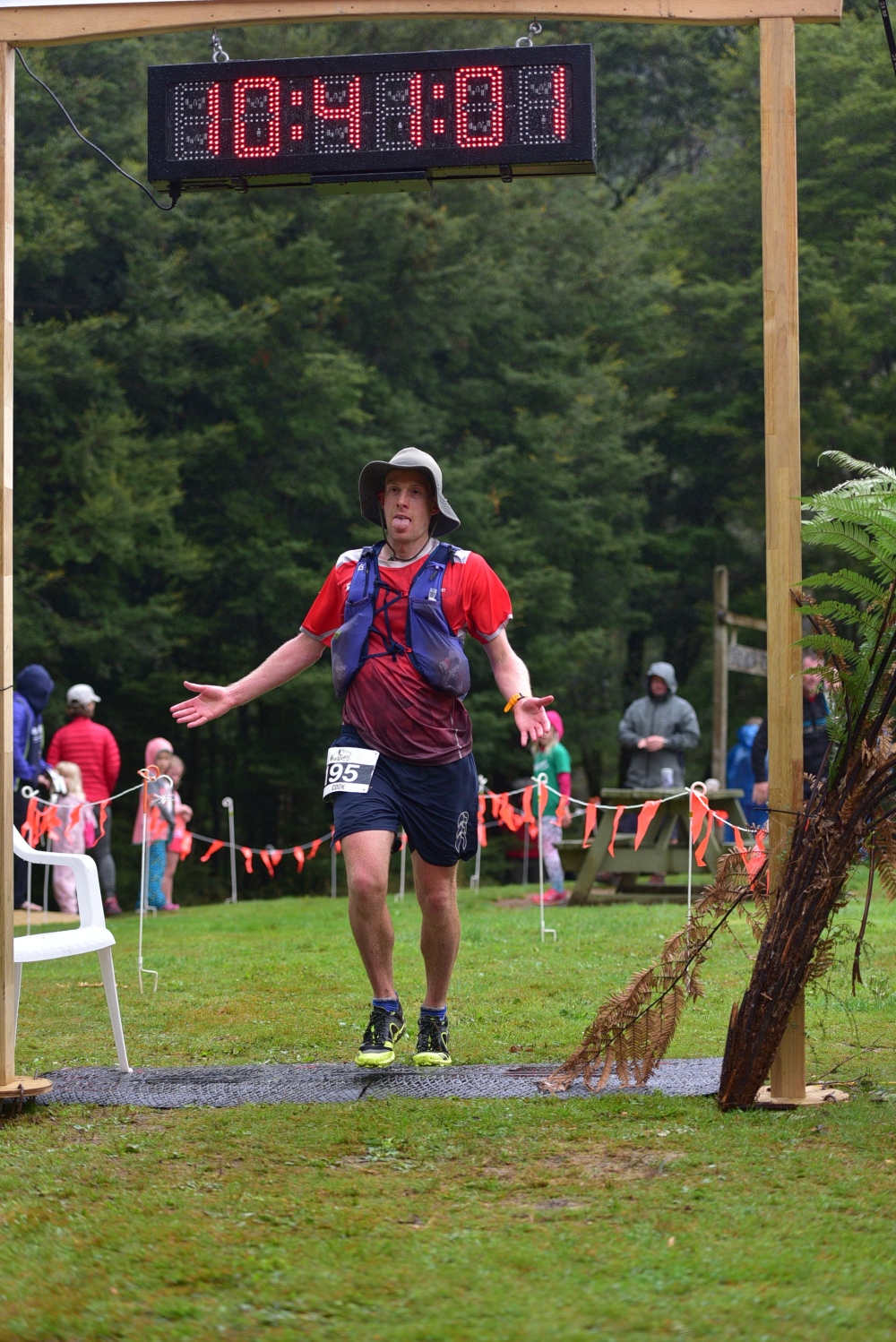 Finishing in style after a tough day in the playground!

Thank you to the media team for their facebook live coverage of the event. I know a lot of people enjoyed following along and it was a real laugh for finishers to look back at afterwards! My finish is at around 3:13:05 on the video here and the famous post-race interview, featuring Ben Kepes’ “always-in-demand” insights, starts just after 3:15:20 . 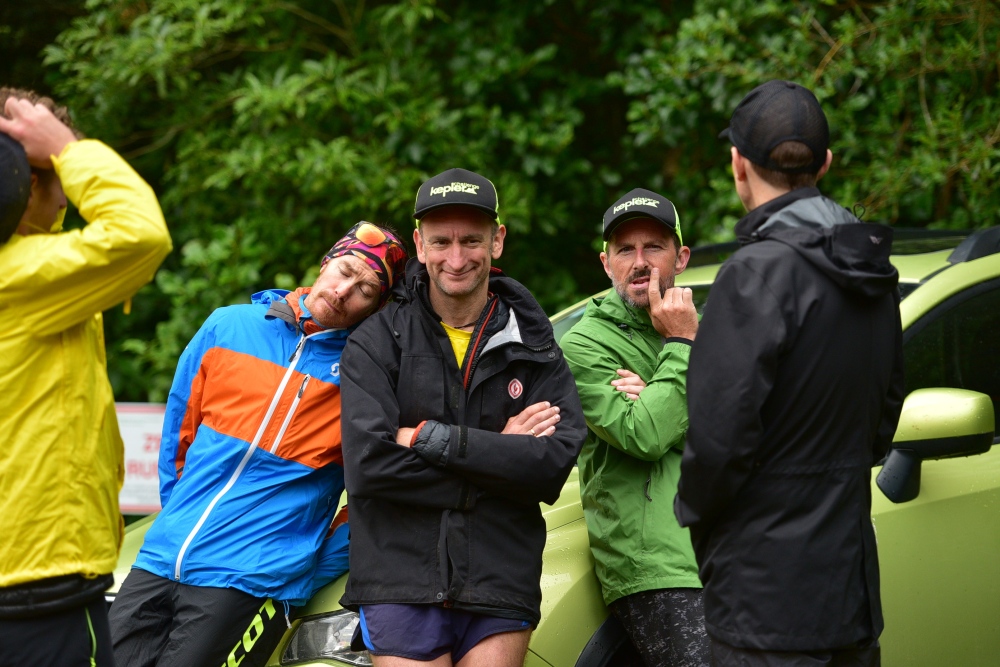 Where is this guy?! We finished ages ago!

Now it was all fun and games, reveling in the fantastic atmosphere of the Old Ghost Ultra and the West Coast community! Well done to everyone who took part in the challenge of this beautiful trail. Thank you to all of the organisational team, sponsors, volunteers, and everyone else involved in making the Old Ghost Ultra live up to the five star reviews! A special shout out to the Hagley Hombres contingent at OGU this year – some fine performances indeed! 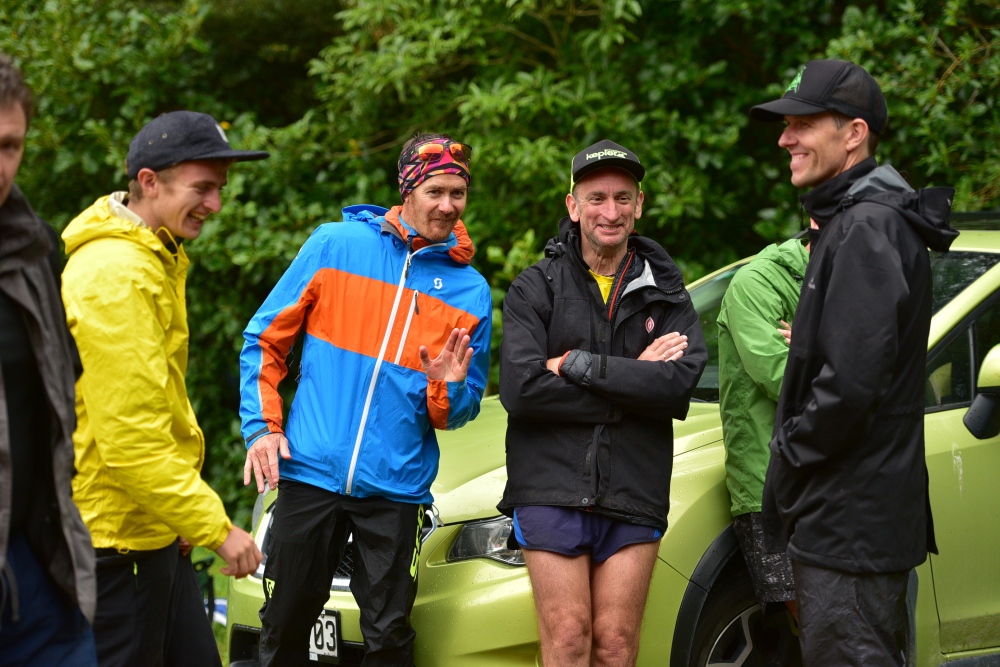 Grant sharing the technique he used to push me off the trail.

The prize-giving was a fun affair, with some amazing performances acknowledged, stories shared, and, of course, a few more laughs. The drive home was pleasant, basking in the beautiful coast to coast weather of the Sunday and also basking in the afterglow of the OGU, which hopefully won’t wear off any time soon.

After stocking up at the Reefton Four Square, and an emotional farewell to Ken, we were bound for Christchurch. My first race against Ruth Croft didn’t exactly go to plan, but I can highly recommend the Old Ghost Ultra! 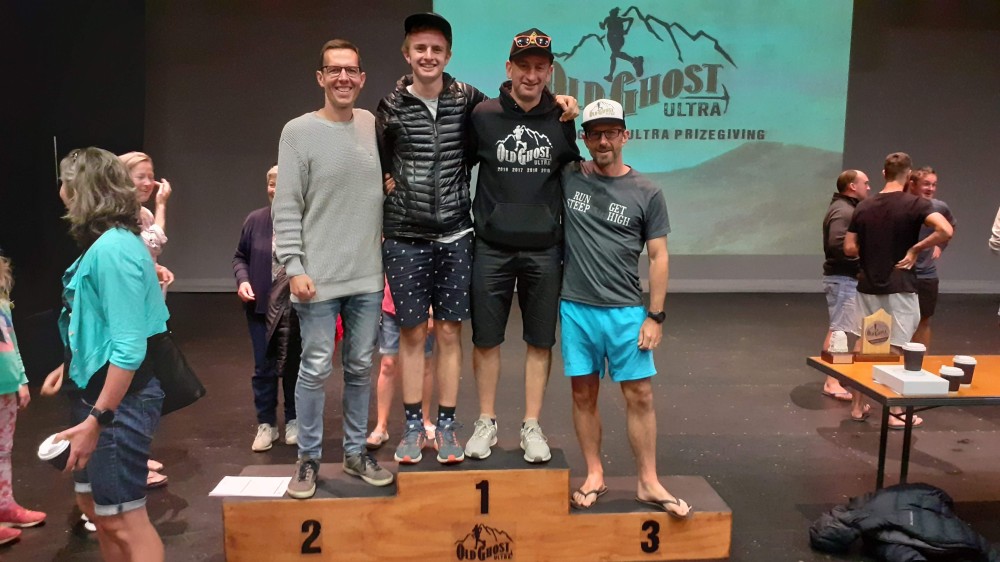 I didn’t make the Hombre podium at this event, but left to right we have: Lee Butts, Yonni Kepes – Trail Runner, Ken Bepes, and Andy Higginson.

My next target is likely to be the Mt. Oxford Odyssey marathon on April 18! Unfortunately this clashes with the Skyrunner event in Queenstown, especially a pain in an uphill-only year – love a good vertical race! However, you can’t do it all.

**If you’re in Christchurch on March 6 come along to Bowenvale Ave before 6:30PM for the VKV World Championship! Check out the event page on facebook!** 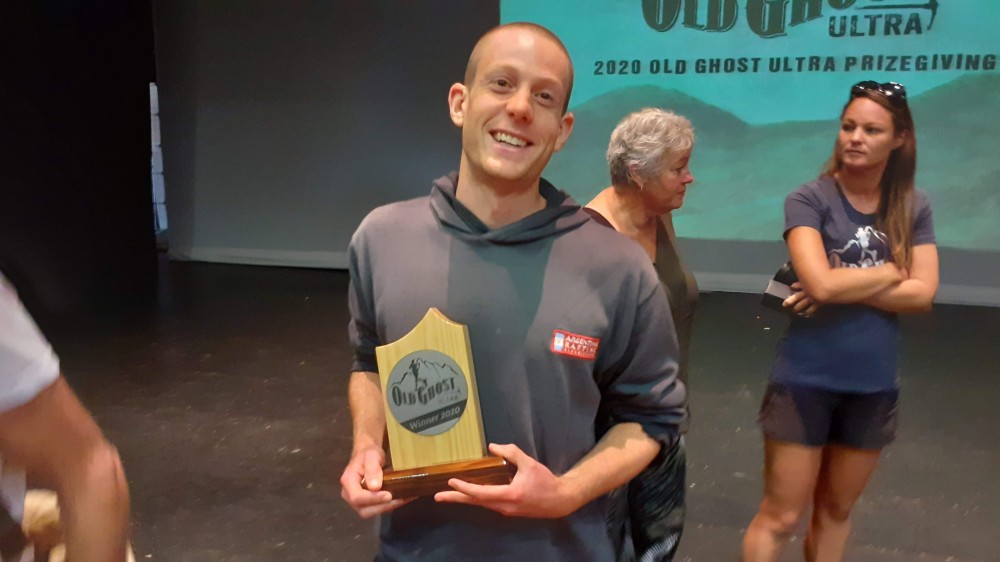 The winner of something, but not this trophy.